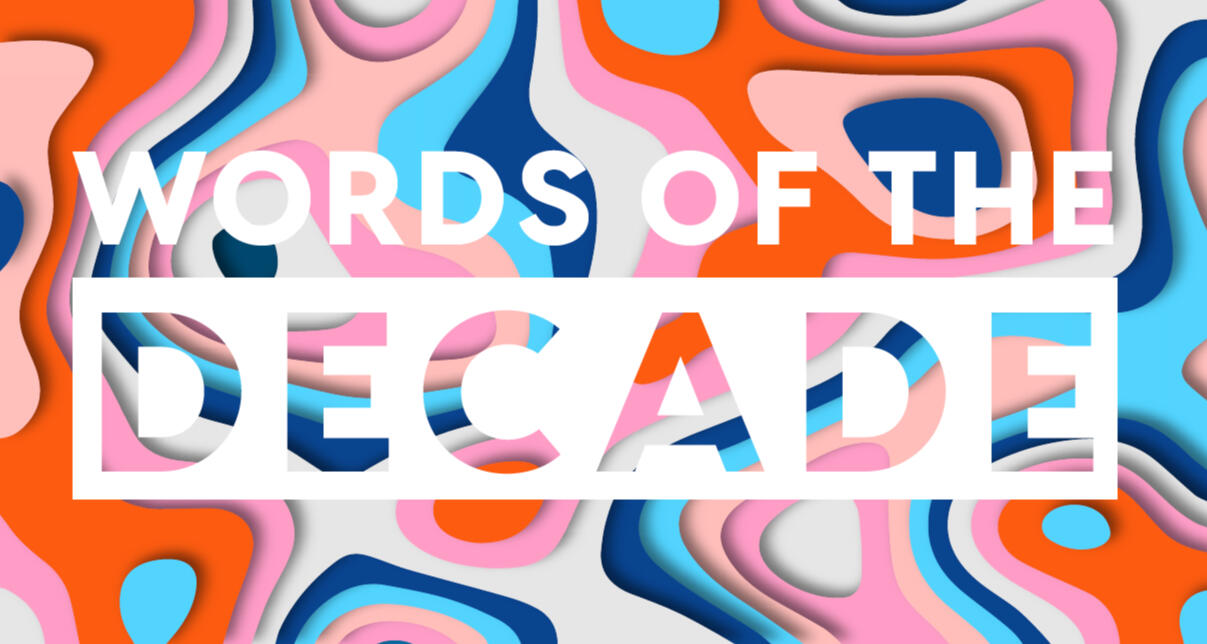 Words of the Decade

Partisan
Those who relentlessly defend President Donald Trump whether they agree with all of his points or not are partisan to the Republican party. Those who are supporters of Medicare For All or free college tuition — and won't budge on the insistence of their installation — are partisan to Democratic agendas. Infiltrating almost every political sentence this decade, partisan is used to describe a strong supporter of a party or cause. Partisan politicians have cast out their own ideas in favor of the priorities of their party, whether beneficial to their constituency or not. And as a result, priority issues for each party have become "litmus test" issues, meaning support or disapproval of them immediately indicates which party a person is a part of.

Brexit
“Brexit,” the term that defines the withdrawal of the United Kingdom from the European Union, was all anyone could talk about in Europe. Following a public referendum in 2016, in which 51.9% voted to leave, the U.K. government formally announced the country's withdrawal in March 2017, starting a process that is due to come to an end with the UK withdrawing on Jan. 31 2020.

Trending
Even if you’re not an avid tweeter, you’ve probably heard the word “Trending” in the past decade. Trending refers to topics and subjects that are currently most popular on various social media platforms, specifically Twitter — in which there's a page dedicated specifically to Trending topics and subjects. The term has even expanded outside of social media to news and entertainment to describe what the thing-to-talk-about is at the moment, or for you millenials — the 411.

Ghosting
You’ve been talking to someone. Suddenly, without any warning your partner seems to have disappeared. No calls, no text messages, no Instagram DMs, no responses to any of your messages. Odds are they’re probably ghosting you.

Ghosting is breaking off a friendship or relationship by stopping all communication and contact with a person without any apparent warning or justification, as well as ignoring the person’s attempts to reach out or communicate. While this term originated in the mid-2000s, it didn’t start trending until the 2010s.

Binge-Watch
Whether it’s eight Harry Potter movies in one weekend or 10 news episodes of your favorite Netflix season in one night, binge-watching has become all the rage this decade.

Binge-watching is the art of watching a long stretch of television in one sitting. Thanks to the new prevalence of Netflix and other streaming platforms, binge-watching has been made easy and increasingly popular in the past 10 years.

Uber
“Let’s just uber there,” your friend says when heading to your favorite restaurant on a Friday night. Uber, a ride-hailing app, has transformed from a noun to a verb this year. Instead of walking or biking to your final destination, the new idea is just to uber there. Uber is available in over 700 cities nationwide to provide rides to civilians to any destination they need to get to. Uber has taken over the taxi world due to its convenience and reliability. Why hail a taxi when just a few clicks on the easy to download app sends a driver ready to be your personal chauffer.

Fake News
Although fake news is not new, it has become a hot topic in the past 5 or-so years. The rise of internet and social media has enabled a whole new way to publish, share and consume information with very little regulation or editorial standards. Things like clickbait, political propaganda, biased news and misleading headlines can fall under the category of fake news. Fake news can be profitable for some or even lead people to believe or support a specific idea by partisan coverage.

It is often difficult in this day and age to determine fake news from real, reliable journalism, which is why the term is swirling around our conversations on a daily basis. And as President Donald Trump began to use the term as a description for news that showed him in a bad light — news that wasn't necessarily inaccurate, but included information that reflected on him negatively — it rapidly increased in use for his supporters and staff. This created a blurred line between fact and fiction for news-readers — and as a result, news publications were increasingly second-guessed, sometimes labeled as inaccurate entirely.

Mass Shooting
Since 2010, the horrific scenes of mass shootings have haunted the nation’s conscience. Each breaking news story floods the nation with grief and anger. But it keeps happening. Although these senseless, preventable acts of violence are happening at a higher rate than ever before, the impact of them has decreased significantly.

According to Vox, there have been 2,320 mass shootings since Sandy Hook elementary school in 2012. Mass shootings even hit the Kansas City area in 2019 at Tequila KC, a bar in KCK, as well as at a First Fridays event in downtown KC.

Black Lives Matter
Following numerous instances of police brutality against the black community –– specifically the killing of Floridian teenager Treyvon Martin –– the #BlackLivesMatter campaign and movement began, forcing the country to confront it’s deep-rooted problems with race and inequality. Black Lives Matter was formed as a rallying cry for men and women seeking inclusivity and equality in 2013. And in just five years, Black Lives Matter supporters and freedom fighters have transformed this movement into one of the most influential social organizations of the post-civil rights era.

Climate Crisis
In the past decade, climate change and global warming has risen to a top-tier world issue and priority. The United Nations stated that we only have 12 years to change this climate change catastrophe before the most drastic effects are irreversible (if we stop anywhere in between the 12 years, we're at least saving a little). The global temperature rising could result in severe drought, floods, extreme heat and poverty for hundreds of millions of people. The term climate crisis has been used to describe this upsetting threat of global warming to the planet, and to urge everyone to make a change in their climate threatening habits.

Meme
The increase of social media users in the past decade has sparked a slew of trends— one of the biggest ones being memes. Now if you’re sitting there with absolutely no idea what a meme is — you're under a rock somewhere, but not to worry — it is basically a random image with some relatable writing slapped on top. Memes vary from images of Kermit the Frog sipping tea all the way to a stock image of a boy walking down the street with his suspicious girlfriend. There are even social media accounts dedicated to memes, yes you heard me right –– memes only. But no matter the image, memes are something that have brought people a little closer this decade with their universal relatability and comedy.

Hashtag
Hashtags are #everywhere. Hashtags allow you to connect social media posts on different platforms with similar posts or specific keywords. While Twitter unveiled the hashtag feature in 2007, it flourished this decade to almost every social media platform integrating it. In the past 10 years, the hashtag has become an integral part of posting and sharing. Hashtags can be used for news, entertainment or even as a marketing tool for businesses appealing to social media participants.